The Games – as a Clydesider!

Before even considering retirement, I joined Ian in applying to be a volunteer at the Commonwealth Games in Glasgow. Having applied for a variety of roles, I was interviewed for, and was successful in becoming a driver. Not a bus driver explained the organisers; more a VIP limo -type service. Not exactly my choice of role but sounded quite fun. It didn’t quite live up to my expectations!

We undertook two days of training. Lots of information given out about just about everything a driver might need to know. This was done very efficiently, putting large numbers of potential drivers through their training. Then out on the roads in the three cars we would be using for the Games to get used to them and to get familiar with the likely routes we would be using during the games! 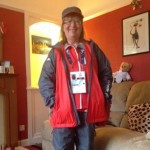 The uniform – I did not wear the hat!

Collected my uniform and that was me all ready for the Games!

The cars being used were all Ford. They all had varying amounts of technology which I thoroughly enjoyed. The C-max was the smallest. A kinda estate car with three rows of seats. Got 6 Africans in that on one occasion. Three in the back – meant to take two – two in the middle where there are three seat belts and one in the front next to me. Then there was the Galaxy which we had most of the time. A bigger car, with great technology. Also took 6 plus driver but tended to be run with the back seats collapsed for luggage. And the big Torneo which had a large space for luggage. Almost a mini bus and I had to grab onto something to get in it. And it was not particularly easy to park.

On that subject we became very proficient at reversing into a tight parking space. To fit all the cars in at the depot we had to be very close to each other. Just room to get out. On the passenger side a couple of times. We all appreciated the comment on Facebook by one driver, that his team were getting that good there was room for an extra car in their line at completion of shift!

A few weeks before the Games began we got our shifts. We had been asked for a minimum of 8 days. I got 17! ten hour! shifts, approximately 6.30-4.30pm, 3.30-1.30am …. And 2x 9pm-7am. I eventually cancelled the two nights after hearing from the other drivers that they did nothing during these shifts. Or almost nothing. I did hear of one guy sent to Barry Buddon in Carnoustie to pick up people for the airport at 3 in the morning. I decided I was too old for nights! Takes me too long to get over them nowadays. The latest I got home was 3.15am after a shift that finished at 2.30 and went right to the wire because of a couple of extra trips unofficially requested at the village. I enjoyed the trips that were not really allowed more than those that were ‘official’.

So the day arrived for my first shift. The first three were during the ten days before the Games began. Kinda wondered why but now realise that whatever the reason, these were useful for familiarising ourselves with the whole process, cars etc. Getting used to the radios took some practice! Earpieces with constant traffic from the other drivers can be quite……distracting. Add to that the ordinary radio and trying to drive along the approved Games Route Network (GRN), maybe using the sat nav….. Multitasking with a vengeance.

I might add that by the end of the Games we were getting quite fond of that earpiece – even using the radio to speak to other drivers on occasion. Control, control this is Bravo 194 over!!

So basically we just spent these three ten hour shifts hanging about at the airport and being sent out to practise the routes. Forty cars lined up on the roof of car park 2 on one occasion! We had a break out space in the airport where there was good coffee, tea, the occasional snack and wifi. 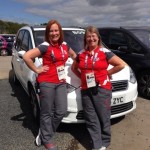 Nikki and me with a Galaxy

(Met my pal Nikki there – and learnt to AirDrop).

However    Not      One    Customer!!!! Novel for the first shift, boring for second shift, totally disillusioned by the third!! However the Games were about to start so it would all kick off!!

It didn’t. Had times of busyness, times of mucking about, but many hours of total nothingness. Began to take my crochet, Kindle and chores to do via phone. Ran out of data at one point!!

My strongest emotion during the whole experience was envy. We all had radios to keep in contact with HQ (control), and on days of boredom, I could not shake off feeling envious of those cars who were sent to busy venues like the Athletes Village and the Hilton/Marriott. I don’t do sitting around very well! My worst day was Opening Ceremony day sitting around at the Emirates in 28 degrees with no shelter except the cars and a fight to get water. Totally disorganised! Deserted! I am going to say no more. Suffice to say I took the next day off to rehydrate and recover….

However I did have some busy times. My favourite shifts of all were at the Village. Had one whole and two half shifts there. Facilities were good with toilets and a comfy little hut with coffee and a TV. It was well organised also with a system which sent us all out in turn. Even did a couple of unofficial runs from there including staying on after the rest of the team had left. The other good place was the Games Family Hotels. Once organised, this was fun. With fairly constant work. And quite exciting wondering where we would be off to next. Got to know Glasgow well and only got lost once. Quickly managed to envisage best routes and when it was best using the sat nav. Used it sparingly as it did not know about the GRN!

Facilities for drivers varied hugely between venues. As already mentioned, the Village had everything easily accessible. The Games Family Hotels also had these, so one could actually have a proper break. Breaks were not factored into the shifts. Needed to organise that ourselves and be quite firm about it if one was in a busy venue, or else one could feel obliged to keep going without food or toilet breaks! Other break out areas were to be found within the venues which meant going through security. This was OK, but there were limited passes for this and you couldn’t really stay in the area when there were only two passes between 20 plus drivers! At some these were quite distant. The SECC was a long walk for coffee although a local hotel allowed toilet access. I snuck into the Marriott on one occasion before returning to the SECCfrom a trip – just to get a coffee! I get jittery after four hours if I don’t get a coffee.

Having decent facilities for the drivers, like the Village, made for a much better atmosphere within the team. Gold Coast please note!

So who were the VIPs I transported? Well, that is a good question. Some drivers got people like Seb Coe, Dame Kelly Holmes, David Beckham!!! I didn’t. Did I get anybody famous? Good question. Asked frequently by my children. Not knowingly was the standard reply! Had Usain Bolt got in the car I would not have known it was him. Unless you managed to read their accreditation passes, there was no way to know. And I have no idea who anybody is in the world of sport. Might recognise the odd cricketer but they were not playing here…. 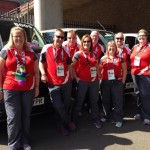 The Black team with our Torneo

But every one of my passengers was interesting. I transported people from various African countries – Rwanda, Uganda (a VVIP), Kenya etc, from St Helena, and Tuvalu, from Barbardos, St Kitts, Jamaica ( including a gold medal winner) and athletes from Trinidad and Tobago. The latter are meant to catch a bus but there was a monsoon so I told them to jump in. From Australia, New Zealand and Norfolk Island – interesting chat about its origins. And a mixture of home nations and other odds and sods such as journalists, sponsors and a UNICEF ambassador, Scottish hockey players and NI boxers who missed the bus.

The two that stand out the most were a Lord and Lady from …….who were delightful. Spent some time doing what we are not meant to do i.e. taking them places and waiting for them. Not local and kept asking me to do things like double park in the middle of Glasgow and Lady…. really did not like having to wear her seat belt!

The other was an official from a European country who questioned me about rheumatism in this damp climate and then gave me, me!! A lecture on the importance of a good diet and avoiding fast food……and promptly asked me where he might get fish and chips from before catching his train!

Overall then it was a great experience. Bombing around the city, going to places others were not allowed access to. Meeting other cheery Clydesiders doing their bit for Glasgow. Being a part of the best Commonwealth Games yet! I feel very much part of the Glasgow/Scotland scene. 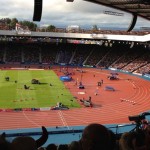 Hampden and the athletics – the day it did not pour! 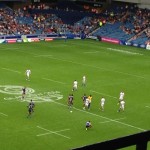 Ibrox and the Rugby 7s

I did get to see some of the sports by paying for them. I suppose a part of me imagined we might get into the venues as part of our role, but that was maybe naive. It could be a problem if all 15,000 volunteers got access to everything. Okay so there were down times. A degree of … interesting…. management decisions. But the positives far outweigh the negatives.

I would do it again. 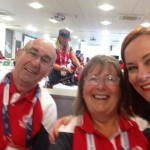 This entry was posted in Commonwealth Games. Bookmark the permalink.