Up nice and smart today as we are off to Altynai’s induction to school. She starts next Tuesday, but today the parents get to meet the teachers and see the other pupils and the school and classroom. School runs from 1st Sept until 29th May. Umar has his induction also but goes first with his Dad. He looks very smart and takes some white roses. 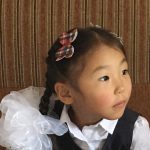 Altynai is very neat also with a bunch of flowers for her teacher. In her hair she wears the tartan bows I brought. When we arrive we are directed into a tennis court where all the teachers are waiting to greet their pupils. Every teacher is introduced, several pupils demonstrate dance, the Head teacher gives  a stirring speech about the value of education – all in English! The school itself has mottos also in English. I have been reminding Altynai about her English and she has been quite shy about using it but I guess she will soon have no choice!

After a lunch of Plov, we all set off to Izzyk-Kul. This was a long trip across the level plain and then through a gorge surrounded by many and very varied mountains. 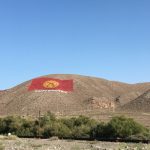 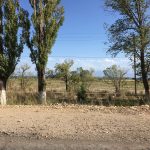 the second largest lake in the world. Can you see it through the trees? 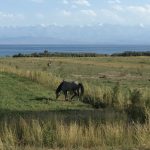 It is a salt lake formed from tectonic movements which is being filled  from glaciers and rivers but with no outlet, hence the salinity. It is 170km long and 70km at the widest point. Narrower here you can see majestic snow capped mountains on the southern shore. We are going there after the Games. Lots of horses roaming the pastures, and the roads, as these are a crucial part of the Kyrgyz people’s way of life.

Another half an hour and we arrive  at Aina’s mothers guest house. Here we have a suite, bedroom, lounge, bathroom and drying room. Spotless and comfortable and with room to properly sort out suitcases. 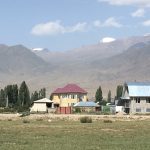 We had just had a good repack when we got called to dinner. I was given a noodle soup although I could not see any noodles, and Ian a vegetable soup which turned out to have cabbage in but was delicious. This was followed by the usual delicious fruit, locally grown.

Then Aine suggested visiting some local hot springs. These are piped from a source deep underground to several different outlets. So Aina, children and ourselves spent an hour in a swimming pool at 37degrees. Very tiring. But very relaxing. I have no idea how anyone would find these springs as it was accessible through a number of non descript buildings. On the way out we met ten coaches bearing police for security at the Games starting tomorrow. Feeling all warm and relaxed we retired to bed.