Arrived in Aberdeen in good time to settle in and unpack. Mentioned to reception that I hoped to meet up with the other external for dinner but when she had not arrived by 7, went down on my own. Soon found out why she had not arrived. The airport was shut! A hole had appeared on the runway and the airport had stated that it had promulgated it to allow smaller planes to land but not the one from Norwich. So her plane had been diverted to Glasgow and she was to be bussed to Aberdeen arriving around midnight.

So I dined alone. Not a particularly interesting meal as a set menu but the glass of red wine was very nice.

Then I retired to my room and played with my Apple pen looking for free apps to use it with. This one NEBO  is pretty good. Converts to text as you write. Pretty accurate despite my terrible handwriting 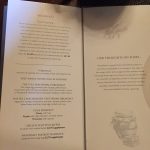 Breakfast next morning more than made up for dinner. Eggs Benedict Royale- the most delightful 1 have ever had. Delicious.

Taxi to my last meeting as external examiner. Some scripts to check, the lecturers keen to discuss problem students, proposed tweaks to the programme and some exchange of midwifery education news.

Out of the mouth of babes – reading through scripts can be fascinating as the students essays can give a suggestion of the practice they see without realising. Two in particular stand out. And paraphrasing so not to plagiarise. And a summary of several comments in the first case.

‘Midwives must give balanced information even though they disagree with physiological third stage’!

‘If the midwives practice of normal birth is not up to date, another midwife who is up to date must take over!’

Then the exam board itself. Lively discussion around the results of last years assessments. It was great to see clinical midwives present at the meeting, ensuring a link between theory and practice.

Finally a note of thanks from the chair for my five years as external reinforced by the lecturers and my time was finished.

The journey home was not without incident however! I caught a train two hours earlier than expected. But it was held up for 70 mins outside Stirling by a freight train whose container had slipped. Gave me more time to hunt Pokemon though!

What to do to replace my EE duties? I have something in mind!