Ian slept well although I had a bit of a restless night. More due to time change than our bed I think. Over a leisurely breakfast of bread bought from the baker on the street corner, Kyrgyz honey with seeds, natural yoghurt, various cheeses we chatted more. Altynai and Umar ate rice porridge and buckwheat porridge respectively. 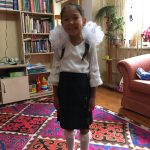 Literally as it sounds, grain with milk cooked in the microwave with added sugar. They are off to school for an induction day. One very pretty little girl was beautifully dressed.

Then Aina proposed a leisurely day rather than a long drive or flight to another part of the country so we drove up in the mountains to a spa hotel, to enjoy sun, swimming and sauna. No sun though, just clouds; the weather had changed from mid 20s to just 18 degrees and in the afternoon it rained!

So we spent four hours relaxing, swimming, having a massage. Now the latter was a different experience from back home. No preamble, please remove your clothes, no privacy to do so or towels to cover up, and a massage that started and ended with the feet. No great time spent on neck and shoulders. Having said that, it was good! Aina had a chocolate wrap….. 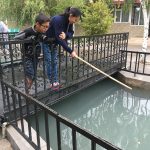 Time for lunch thereafter at 4pm although we have had plenty to eat and I had not felt hungry earlier. We stopped in at a trout farm/restaurant where Umar had been previously where you catch your trout which is then fried for your lunch. Luckily (?) the fish were not biting so we selected from the menu. 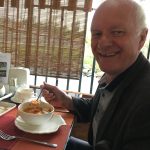 A very interesting but tasty lentil soup for Ian whilst Aina, Umar and myself shared kebab and salad. Washed down with tea of course, jasmine this time. Ian had two cups of coffee none being in evidence on previous days. The trout farm had special enclosed rooms for Groups. 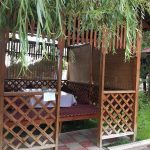 Home to pick up Altynai and Amir from nursery, and time to relax before going out for dinner. Not so much relaxing as playing with a little rogue on a sit on car! Amir spends his time bombing round the place, getting into everything he can reach, with a wicked grin on his face. 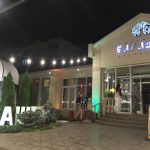 Dinner in a very posh restaurant, still not expensive, but with the best kids play area I have yet to see, with a series of dressing up and pretending rooms. 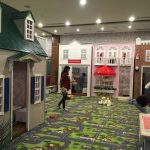 These kept all three children amused whilst we enjoyed dinner. Ian had mutton chop with seared veg and cheesey potatoes, Aina had sushi, and I had grilled trout with orange marmalade. Well, we had intended trout up at the fish farm. The little ones had pizza. 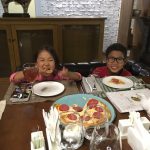 Aina told us the Kyrgyz people never ate fish until the Russians came and introduced the concept. Despite lakes full of fish, and people starving, they never thought to eat the fish.

And so Day two ended.