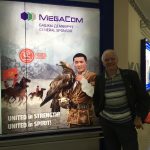 We are in Kyrgyzstan! We were welcomed at 5.30 local time by a very alert Aina, for such a time. There were some volunteers from the Games there also waiting for competitors from USA and Sri Lanka. There was a little bit of a wait as we went through passport control but all very smooth after that. We got talking to an American who was returning to Kyrgyzstan to record a VLOG of the Games. He spent two years here previously volunteering in an orphanage. I have forgotten the name of the blog now but will look it up later.

Out into a tiny and chaotic car park, we headed home.  The airport is an hour from Bishkek along a straight and dusty road. 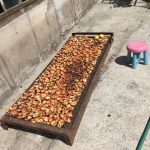 We were welcomed into a lovely warm house with three living rooms, kitchen and bedroom. We were to sleep in the lounge on the floor, in a bed built up on various layers of thick padding. 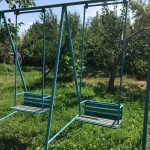 After a breakfast of fried eggs and tea, we were left to sleep whilst Aina went to work. We slept for four hours quite successfully then got up and showered and dressed and I had a wander round a large back garden. 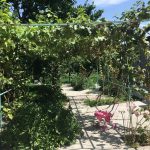 Fruit trees and bushes, roses, grapes, a sheepskin drying on the ground, apples drying in the sun, a cellar with preserves, swings and lots of vegetation.

Aina came home at 2 with Altynai and Umar. Amir, who we had met in the morning,  and who was not at all sure of these strange looking people, was at nursery where he goes everyday. First we went to Faisa’s for lunch. Noodle soup for me, one with rice for Ian, but more a meal than a soup, heaped up with meat, vegetables and with a spicey taste. 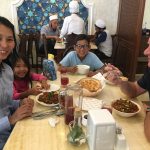 This was washed down with Compote which is a fruit juice made from the flavours of dried fruits. The fruits are boiled up with the dried fruit, then the fruits are removed and eaten leaving the delicious juices. Four soups, compote and a bread came to 800SOM or £9. 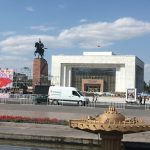 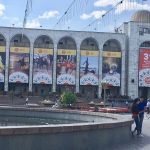 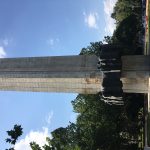 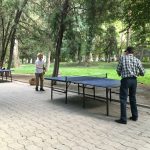 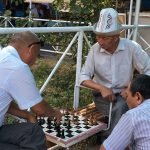 We then went for a wander round the city. We saw government buildings, big squares full of flower displays, ice cream vendors on every street corner, and not a particularly busy place.

Very pretty though with several large very green parks, with table tennis, men playing chess, children’s parks etc. We went for a ride on the Kyrgyz eye and generally admired the city centre.

We then went to fetch Amir from nursery, a well set up busy unit, where Amir is obviously quite happy.

Home now for a rest – Aina has been up since 04.30 and has done a full day’s work as well as show us round. We were entertained by Amir bombing around on a little sit on toy, getting into everything he could reach. There had been some discussion about eating in, eating out, but in the end Aina’s sister Nellie rang to say she had booked a table so we all went out.

We went to a fabulous restaurant in the middle of town, one of a string of such restaurants, Navat. 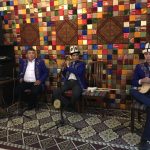 Beautifully decorated in the Kyrgyz way, we sat in an enclosed alcove. A very cheap but wide ranging choice of meals and we encouraged Aina to choose local meals.

We started with a salad dish, and then Ian had lamb and potatoes whilst I had dumplings along with the two sisters. 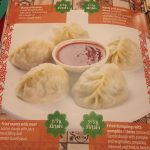 These were difficult to eat until Nellie told me that Kyrgyz people eat with their fingers, much more sensible with these slippery morsels. To drink we had tea, which was a mint and fruit tea, which Ian tried, liked and joined the rest of in drinking. We also had compote for the wee ones. 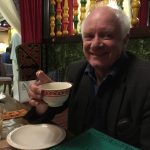 Whilst all this was going on a traditional band played music and the children danced. At one point the waitresses performed the typical Kyrgyz dance, and again the children joined in.

Time for home then with very sleepy children. Altynai fell asleep in the car. Amir was a bit of a handful as he was tired too and kept trying to climb in the front of the car, but Umar keep a hold of him. No children’s seats, or seatbelts in the back of this car.

Once home Aina made up our bed and put the children in bed, in that order as older people are cared for first, and we met and had a great chat with Sultan.

This entry was posted in Midwifery. Bookmark the permalink.