Up early as Aina needed to get up to the ethnic village at 9 so we arrived at the hippodrome in good time to see the opening ceremony of the Kok Boru. This is a game of three periods, twenty minutes each although clock stops when the game stops. We watched the first game between Mongolia and Kyrgyzstan. Kyrgyzstan thrashed Mongolia 29-5. The game starts by the goat carcass being dumped in the centre of the field and three players from each team gallop to pick it up off the ground. This carcass weighs 35kg and is very awkward and heavy to hold. The Kyrgyzs seemed to win every time and Mongols just couldn’t keep up. The trick once winning it seemed to be to get a secure hold of it over the saddle and then sling it over the arm as you approach the well so it can be thrown in. At least once I saw the player follow the carcass into the well. Not a deep well I am pleased to say. The Mongolians sometimes manage to get it off the ground but either dropped it or got it wrestled off them. 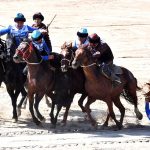 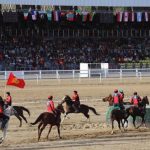 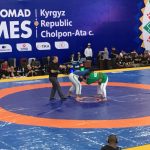 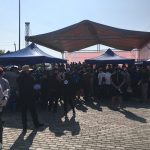 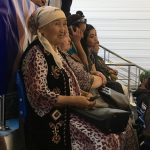 After the game we went for a coffee but had to wait easily half an hour for it. They seemed in no rush. It was nice when we got it and we bought a pastry to accompany it. A sit in the glorious sun and then we moved towards the Sports Complex for wrestling but were diverted by a huge crowd gathered around an outside stage. This turned out to be arm wrestling, male and female, by body weight. Obviously a very popular sport considering the crowd. We watched for an hour. I was surprised at the fact that they can hold a pole with the other hand, wrap their leg round the table leg if they wanted, and use their whole body if need be. Many bouts were over in the blink of an eye. Some collapsed in one way or another. Some took a while. The contestants were often very vocal on their winning a bout. Countries such as India and the USA didn’t do too well. It was mainly the *stans who did best. This went on all day and we saw the medal winners leaving about 5 although we had moved on by then.

We moved on to the last type of competition on today. Belt wrestling.  This is a type of wrestling where the competitors wear a loose waist belt and their oponent grabs the belt with both hands and then attempts to wrestle the opponent to the ground. They get one point for doing so but 2 points if they pin their opponents shoulder blades to the ground. Again there were bouts for males and females, equally, and of different weights. We really enjoyed this and the place was packed. We stayed for some time til we realised it was 3 o’clock and we were very thirsty and had had no lunch. So we left and drank coke and ate Caesar salad.

A return to the arm wrestling for the finals and then we waited for Aina to come from Kyrchyn where the ethnic village is situated.  We are off to the UK Ambassador’s local villa for a reception! She was late because they closed the road for VIPs again. That must be so annoying for the people here.

We had planned to change in the hippodrome loos, and put my posh frock on that I packed just in case! but when Aina arrived she had rung ahead and arranged for us to change at the Ambassador’s villa.

So we drove another 30 mins to the east to a nice country villa and helped ourselves to one of the bathrooms. Then we discovered the reception was being held out in the garden where the temperature was quickly dropping. I told Aina that a glass of wine would soon help me to keep warm.  Two glasses did it even better!

It was a thoroughly enjoyable evening. We spoke to lots of interesting people. And kept our shoes on! We had a quick word with the Ambassador, a very friendly guy, before he got called away. We also had quite a chat with Baroness Stern who appears to be a sponsor of Kyrgyzstan. We also talked to a media guy, various people who worked at the embassy including a Scottish girl from East Kilbride, but the best fun was chatting to the UK team who had been invited to the reception. Nellie(Neil) and another three guys from the Highland Games Association who had given a demo of caber tossing and hammer throwing, and a small group of pipers from the 19th Regiment Royal Artillery. The Pipe Major commented on the great time they had had that day visiting the ethnic village and how …. bizarre ……it was for a serving officer of the British Army to be welcomed into all the yurts including Afghan ones. Neil was a hoot with colourful language, knocking back whisky and dwarfing me but chatting away like I was one of the guys. I felt quite at home.

Baroness Stern and her husband. 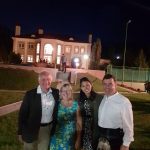 Pipe Major, Aina and the two of us 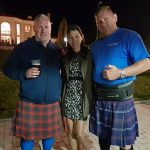 The evening ended with a demo of the pipes and the Highland Fling performed by a very anxious looking young man. Ian had a conversation with him and he confessed to having been very nervous  doing the Fling at the ceremony at Kyrchyn, but in truth he had no need to be as his performance was excellent. Ian also chatted to one of the athletes who turned out to have been taught History by one of Ian’s former colleagues!