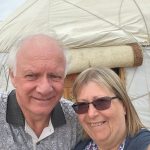 Not a bad night. A certain little Amir stirred several times but very quickly went to sleep again. He was up at 7 though so an early start for us all.

Breakfast in the big yurt and then back to Bishkek. 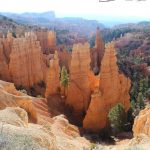 The original plan was to visit a local majestic formation in the mountains, the fairy tale canyon, but unfortunately Sultan had to fly to Tajikistan that afternoon, and we needed to get back for the children getting out of school.

So we retraced our steps and travelled to the intersection of the north and south roads around Lake Issyk-kul to pick up Aina’s Mum. We stopped for second breakfast at a local spotless cafe for coffee and a break before the longer drive to Bishkek. The mountains had more snow on them today. 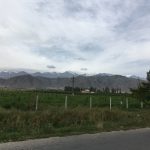 Snow on them thar mountains. 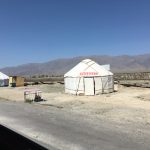 Lots of yurts set up alongside the road for roadside sales 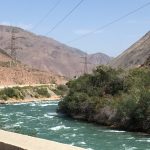 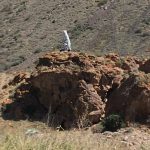 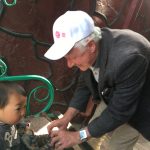 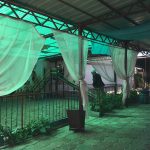 Large play area next to the function room.

The children were delighted to see Mum and we were then reminded that we had been invited to a second reception with the U.K. ambassador at a local hotel. So the posh frock came out again. And we met up with the pipe band and Highland games athletes once again. We were delighted to see the young Highland fling dancer demonstrated the sword dance. 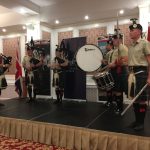 UK ‘athletes’ demonstrating once again at the Ambassador’s reception.

We also met several people we had seen at the previous reception and got into conversation with the Chief Executive of a local tour company about the potential that Kyrgyzstan has in the tourist market. As a result we were invited out for lunch next day to discuss this more!

Day eight – a night as a Nomad!

This morning after breakfast we were to spend a final morning at the Games before heading to the south coast of Lake Issyk- Kul staying overnight in a yurt camp.

Askar, Aina, Ian and myself headed for Games. Today on the programme Sumo wrestling, Kyrgyz wrestling and more Kok Boru! We settled down to see Kok Boru first as I rather enjoy the sport, but the Russian state could not get good horses and thus refused to play. Kyrgyzstan therefore got a bye. So we tried the Sumo next. This was crowded but was quite fun to see. Not as big wrestlers as I had seen before on the television though. It was quite tiring watching in the sun so I retired to my favourite cafe where I have become so well known after two previous visits that the guy mentioned my Scotland origin. He told me that he had applied to the UK to work in Reading but his visa had been turned down. He suggested this was because they were worried he was young enough to want to stay on as an illegal immigrant. Not sure why anyone would want to leave Kyrgyzstan with its culture and life style. I could see the Sumo as well from here so I watched til the final way over and then tried to find Ian. Mmmmm.

No sign of him but I guessed he would head for the wrestling next but what a crush! There was simply not enough room for all the spectators. I managed to get in with great difficulty but with four lines of spectators there was no way I was going to see anything.

So I went shopping! Well I had a good nosey at all the craft stalls outside the ground. I had previously bought an Temir komuz which I now need to practice playing. I bought nothing on this occasion although there were lots of temptations but I have been given so many gifts I don’t know how I will pack them all!

I reached the Hippodrome only to walk into Ian. He hadn’t even managed to get into the wrestling! So we returned to the Kok Boru which was about the start with the second game. Kazakhstan v Krasnoyarsk. This was a fiercely fought match with a piebald goat, if there is such a thing. Many a time the carcass was stolen by one side or the other, and riders were falling off horses or climbing on to the opponents horse to wrestle for the goat. Unfortunately we had to leave after two thirds of the game to move onto the next stage of our holiday.

Back to the Guesthouse, another lovely lunch…….. and three songs from our Kazakhstan friend as a farewell. 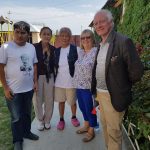 We paid for our four nights dinner, bed and Breakfast, 7000 SOM in total for the two of us (about £80!!!) and off to the south side of Lake Issyk-Kul.

This was another long and very picturesque drive. Some very contrasting terrain and huge mountains. Not many photos I am afraid but then a camera never really does them justice. I had a sleeping boy on my lap once again. The roads were very rough. Apart from Bishkek and near the Games, the roads give the appearance they have never been given their final surface. And the further off the beaten track, the rougher they got.

After about two hours we reached the Yurt Camp which was rustic and beautiful. About ten yurts in a circle with various outbuildings made out of wood and branches; a meeting room, toilets and showers, playground. Kitchen, bar and reception come souvenir shop in small barn like structures. A beautifully decorated large yurt as the dining room. Our yurt held the four of us with mattresses on the floor and not much else other than electric sockets and a light. I quickly learnt to hang my things on the struts of the wall. Two wooden doors closed the yurt and a heavy canvas flap could be unravelled to give added protected against the snow and the wind. 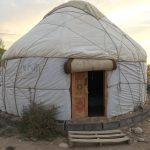 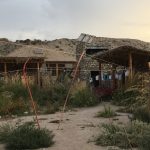 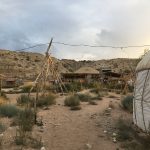 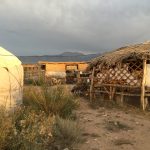 Tends to be more cloudy south side. 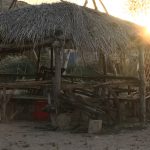 Colourful rocks in the sunset.

As it was an hour to dinner we explored the shore of Lake Issyk-Kul. It’s very pebbly here unlike the north shore. We saw a number of yurt camps along the shore. There were lovely shades of colours in the mountains as the sun was setting. We sat for a while in the lovely wooden meeting room.

Dinner was served in a central yurt. Beautifully decorated on the inside with semi circle low tables and cushions to sit amongst. On the floor! Not the easiest pose for me but very much in character of the yurt. We had a potato dish with onions and the occasional piece of meat accompanied by bread and salad and with watermelon and sweets for dessert. Served with tea of course. We sat with five Japanese students who were enjoying their last vacation before their final year at uni. They had had to take a taxi to reach the camp as there is no alternative. Taxis are very cheap though.

There was not a lot to do after dinner other than admire the amazingly bright stars! No light pollution here. So we retired to the yurt, the four of us, to get a little boy to sleep and to relax and read. Amir was definitely tired and became a little naughty. He got a row from his Mum and promptly threw himself onto my bed ….. and fell asleep!

The downside of staying in a yurt? The outside loo. And needless to say, I needed that facility more often that night.