Day ten – no such thing as a free lunch!

Back in Bishkek and planning our last two days. What did we still want to do? There were two things on my list. A visit to any local museums and art gallery, with immersion in the culture -we decided to do this the next day to give Aina and her family some peace at the weekend before school and work starts again – and the Osh market! Aina’s Mum offered to take us this afternoon after our lunch out. (I never did learn her name!)

So we spent a relaxing time with the family in the morning before taking a taxi to the Park Hotel where we were meeting Isakov Ruslan Executive Director of Glavtour. A very nice hotel! One of two that this company owns, the other being at Lake Issyk-Kul next door to Aina’s Mum’s guest house!

(Incidentally taxis are really cheap, to British people, in Bishkek. For a half an hour journey expect to pay about £2. But agree a price first. If you don’t speak the language you can get ripped off. And few taxi drivers speak any English so we had the address written down. )

So we had a look at the hotel restaurant menu with a critical eye in preparation for our meeting. It was very comprehensive! A number of Kyrgyz dishes; I felt there could be more, and a wide range of  dishes from Europe and beyond. It would keep me happy for days. Isakov arrived a few minutes late with a young lady we had met the previous night. Her role it seemed was principally interpreter although she was very interested in what we had to say.

We were never sure what exactly they wanted from us but we spent a good couple of hours generally giving our thoughts about what we would expect of them to be enticed to Kyrgyzstan as a tourist. The biggest issue we could see was they outsourced trips to other local tour guides rather than providing a ‘package’ and this seemed to be in response to the tourist looking up the attractions and asking to see them rather than the tour company providing a holiday with these attractions inbuilt. We also spoke about retaining their culture, organising cultural experiences in the different districts similar to those at the Games and including a night or two in a yurt!

Once we had finished our lunch, we met up with Aina’s Mum at her apartment via a taxi. Who got stopped by the police! A very active police force and in great numbers! Not sure why. But we got there although we were confused by the numbering of the apartments and had several three way conversations via Aina. Because her mother did not speak English either!

Once we got together! she took us on a trolley bus to the Osh market.

Now this was an interesting cultural experience once again. I have never met such polite and considerate young men, and women! The minute we got on the crowded bus, a young man got up to offer me his seat. And as we travelled we saw this happen again and again, with not the slightest hesitation. And when there was no young man, a young lady did this instead. And this included mothers with children and small babies. Pushchairs did not appear to be much in use – babies are carried! And I saw lots of babies at the breast with no embarrassment! 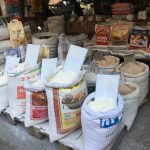 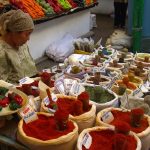 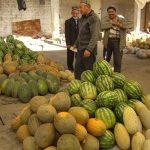 So many melons. Who eats them all?

So the Osh market! A labyrinth of colourful stalls within, surrounded by local people selling goods from cars, mats, offering services like getting weighted, car boot style, or their local produce. This was melon season and I have never seen such huge, varied and numerous melons. Sultan came home with several different types for us to try whilst we were there. We really were not looking to buy anything much because everyone had already been so generous with their gifts but I did want to experience the smells and sights. I did buy some spices and big bobbles for the girls.

A phone call from Aina to explain that she would meet us at her Mum’s and we took the trolley bus back. Aina’s mum lived on the sixth floor of an apartment block. No lift that I could see! The lounge was taken up with a huge dining table with various teas, fruits and nibbles as permanent fixtures it seemed. 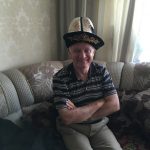 Difficult to talk but she got on with her chores and we sat patiently apart from a bit of fun with Kalpaks of various styles.

Then another phone call from Aina. We were off to her sister Nelly’s flat for dinner and would we mind another trolley bus trip to meet her there. No way. I love people watching.

Nelly’s flat was beautifully decorated but quite small. We all sat in the lounge on small chairs around a coffee table eating a very nice meat, potato and vegetable dish. The secret is in the length of cooking it seems. 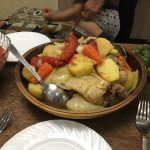 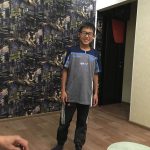 Omar – such a happy and helpful young man.

Lots of fresh fruit for desert as well as little courgette pancakes/ omelette.

After a pleasant evening we headed home with Aina minus one child! Altynai went home with her gran for the night with her cousin. 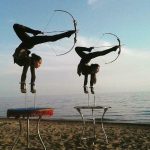 So we are off on a holiday with a difference. Kyrgyzstan and the World Nomad Games! (Thank goodness for predictive text – I could try a dozen times and spell that name incorrectly!)

One of the ways Ian and I pass the long weary hours of retirement is to host international students via the charity Host UK. 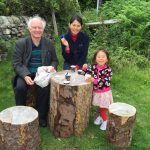 Two years ago we welcomed Aina and Altynai from Kyrgyzstan for the weekend.

They are now returning the favour! Not that we ever expect this when we welcome these students to our home, but we do often keep in touch. Thus it was with Aina so we were absolutely delighted when she invited us to her country a few months ago.

This doesn’t sit all that comfortably with me but what the heck.

Live life to the full!

Two weeks ago, we were honoured to host Razan from Palestine through Host UK. Razan is a student here in the UK and came to stay with us to be introduced to the Scottish culture. She got a bit of the English culture also, needless to say. She enjoyed our food, but enticed us with descriptions of her own types of food. So today I am trying Makloubeh. This is a layered one pot rice dish with chicken and vegetables. Having read over a number of very different recipes, I am adapting one to our taste. Cauliflower features in most versions. Ian does NOT like cauliflower. Note the emphasis. So other dishes use aubergine. None to be had in the shops this morning. So we are having chicken layered with carrots, potatoes, onions and broccoli for colour. How to cook these, what spices to use, also differs from recipe to recipe so….

Caramelise onions with chopped garlic and keep warm in oven. Roast slices of veg in oven. Brown chicken strips and add level tsp allspice, quarter tsp cinnamon, three cardamom pods with water and simmer til cooked. Now line saucepan with chicken, sprinkle with onions, then veg, then uncooked basmati rice. Cover all with water in which chicken has cooked, adding a little more water if required to half inch above rice. Simmer gently til rice cooked. Rest for a while. Then turn out so rice at base onto plate. Serve with plain yoghurt and a side salad.

We will see how this works!